skip to main | skip to sidebar

We survived another week...a weekend in Victoria always gives you something to look forward to. There were three soccer games on three different days. We had one homework bag, letter "p" homework and letter "p" show-n-tell ( the girls wanted to do popcorn and Hays crumbled up a piece of paper...easy) We had picture day on Thursday, which created a little drama from the diva, but in the end Mom and Hadlee compromised with a desirable outfit. Poor Hays needs some nice clothes... Friday was pajama day at school and they were going to be 11:30 pick up so they couldn't get in the car fast enough on Friday morning, yippee!

We went to see Cooper and Cannon on Saturday afternoon and Hays and Hadlee stayed and spent the night with Nana and Papaw. Aunt Melissa sent me a pic of their evening. Hays is a monster and Hadlee a cat. 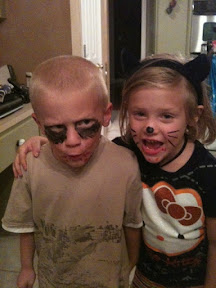 It worked out great for me that Hays and Hadlee stayed because I got to spend the afternoon with Harper at the Mission Valley Fall Festival. Aunt Cy was in charge of putting it on this year and she did an awesome job. Harper got to play games, ride rides and get her face painted. She ended up with pink hair, which her siblings were very jealous of the next day. Hannah got 2nd place with her Halloween Barbie cake, which was very impressive, and sold for big bucks in the auction....thanks to Mema. Harper won a strawberry cake at the cake walk, that made her daddy's week because it's his favorite! I can see why Aunt C wanted Hannah to go to Mission Valley, it's such a neat country school. 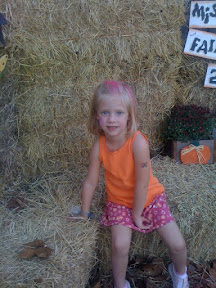 Posted by Jennifer at 2:12 PM 0 comments

I was feeling a little wordy last week...must have something to do with a little boredom that I experience these days.

Thanks, Papa Berger for helping us fix our car. We thought the starter needed replacing, apparently the "crank" fuse had fallen out of place.

Hays can finally watch "American's Funny Home Videos", for as long as we can remember he would freak out and hide in another room. Now he can sit down on the couch, watch and laugh at the show.

We went to Washington-on-the-Brazos today, just a short trip away from us. The kids had fun, it was fun.

We were sick last week...Mommy and Daddy. Harper, Hays and Hadlee were sick the week before....lots of coughing, complaining and running noses. We have got to work with Hays on his "nose picking" it's driving me crazy.

Happy Birthday, Aunt Ro!!!! You are so special to our family, I often ask myself how I make it without you. You’ve been a part of the family since the kiddos were a couple weeks old. You do so much for us and maybe one day we can reciprocate.

Soccer season is in full swing. I decided that we would let the girls be on a girls’ team and Hays be on a boys’ team. It has little something to do with gymnastics and all three of you wanting to participate in it. I know boys can do gymnastics but I don't know if it is acceptable in our family. I'm just going to leave it at that for now. O.k. this soccer stuff is going to be the end of me, just let me make it to Thanksgiving!! I can’t see how we are ever going to do a spring sport in this family. Thankfully I have the help of your daddy in the fall, except on Thursday nights, which you have three games at the same time on those nights in October and November. The first soccer games were last Thursday night and two of you were sick…. I didn’t get to see much of the games but I did get to see the first goal of your soccer careers scored by Hadlee and Jarvis said that Hays had a great time jumping in a mud puddle in the middle of the field they were playing on. (I plan on taking more pics this week) 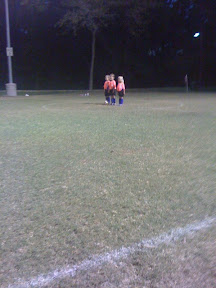 Another Turkeyfest has come and gone. It wasn’t Rubys’ year, Paycheck got the turkey trophy this year. Harper and I decided to let the turkeys run without us this year. Daddy was a little worried that he might have to miss it because Hays and Hadlee were still running a little fever on Friday afternoon. They were troopers when Daddy came home after the cub football game and was ready to get on the road, Hadlee stayed awake until the city limits and Hays made it until Burton. The parade was fun with lots of friends and family. Then it was onto the festivities…the carnival. Hadlee rode the big kid roller coaster. She told her Daddy it was fun but she wasn’t going to ride it again. Hays loved seeing the McDonalds sign from the top of the ferris wheel. 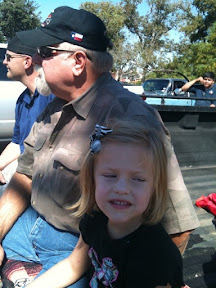 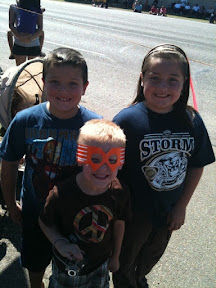 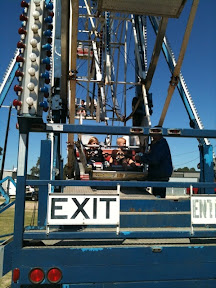 It was a sad day in the car the other day. Harper and Hays both asked, “Where is the Wendy’s sign?” I had to tell them that Wendy’s had closed down. Hays was upset, that where was he going to eat chicken nuggets….I loved that Wendys, they closed it just like “The Bounce” (which they still talk about and it closed down a year ago.)


We spent THREE hours working on homework last Tuesday night. We started before 5 and we didn’t finish until after 8. When the kids got home we read library books, then started on homework while I made and reheated dinner. Hadlee had a homework bag that she had gotten the previous night but we didn’t have time to look in it because Hays had a soccer game and pictures. Hadlee started working on her homework and the other two started eating supper. When Hays and Harper finished supper, Hadlee started eating. I worked with Hays and Harper on a tracing and cutting out their feet for another project. They are making a “foot book” and each member of their family must trace, cut out and decorate a pattern of their foot. Since we have three kids in the same class that meant, three feet patterns each. That’s fifteen feet….. Hays and Harper played for outside, while Hadlee and Daddy did more homework inside. Hadlee got to join for 10 minutes then it was bathtime and gathering up our show n tell items that begin with the letter “f”. Show n tell is suppose to be a secret so I have to get each kid in their room and we explore what they can bring that starts with the letter of the week. I just knew someone was going to pick one of the many little footballs we have collected from the cub football games. No such luck..this week Hays is taking a fork, Harper a feather and Hadlee made a fan with pink construction paper.
And just when I thought we were finished for the week…the kids brought bags home with numbers that needed to be filled up with that corresponding number. Hays-7 (cars), Harper-10 (markers) and Hadlee forgot her backpack at school but luckily Miss Kristen called and told us her number was 6 so she took ponytail holders.

The kids are totally into having me make signs for them. This time they weren't selling anything, they were trying to give away "ice cream cups" of moon sand. Can't say I'm a big fan of Moon sand, and now I know the kids wouldn't even try to sell it. 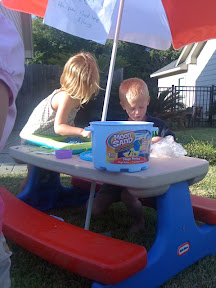 We had the homecoming parade during our week of sickness. Hadlee was sick on Monday and Tuesday. I sent her to school on Wednesday and then let her walk with her Daddy. Look how happy she looked....(I think the long walk did her in because she didn't make it to school on Thursday) 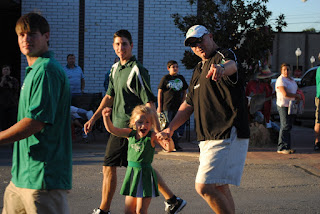 Harper rode in the truck. She had fun, just hanging out. No pics of Hays because he was too busy catching candy and waving at people. The boy had a blast!! 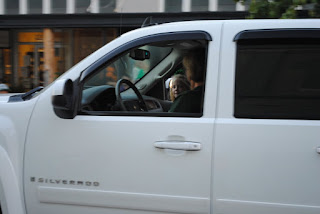 Happy Birthday, Cannon and Cooper!! We loved getting to celebrate your 1st birthday last weekend. 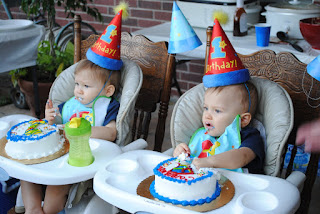 Singing to the birthday boys. 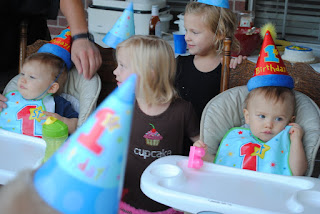 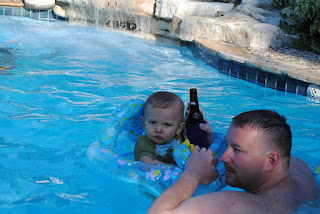 Harper just had to play like she was a baby. 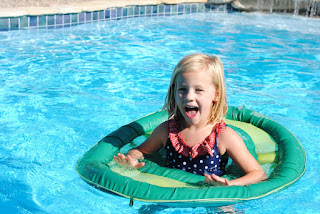 Hays going with the lounge chair. 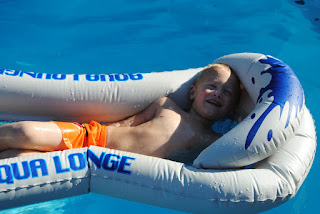 Posted by Jennifer at 9:25 PM 0 comments